Which learnings for the future are inspired by the life, work, and words of Michael Seres?  What is Michael’s legacy ? This was the theme of our panel on the main stage,  day 1 at Giant Health, the event created and co-produced by Barry Shrier and Pr. Shafi Ahmed.  The session, proposed and moderated by Lorena McNaughtan, included Matt Eagles,  Paul Gordon,  Pr. Shafi Ahmed, and myself.  You can watch the video replay below. The panel began at hour five of the day. And I speak around 5’23”. 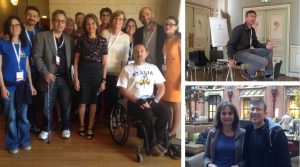 While Michael, humble and modest as he was, might not have agreed that we dedicate a panel to him, the opportunity to gather together and focus on him and his legacy, was a true treasure of a moment.  I had met Michael  in 2012, a few months after his transplant operation, in Palo Alto, as an epatient scholar at one of the early Stanford Medicine X conferences. Michael came up to me straightaway and expressed interest in speaking at Doctors 2.0 & You. His unique person and story were awesome. I was convinced in the first moments and Michael did a dual keynote at 2013, bringing his dietitian to Doctors 2.0 & You. That meeting seems both yesterday and ages ago, in terms of all that has transpired since then in  the community and of course the successes of Michael’s life. While much more remains to be done, we cannot deny that progress has been made in the world of patient engagement.

How do we answer the question of which learnings we take from Michael’s life?
The image that comes to mind for me is Michael as an amazing, fearless surfer, who hopped on each new wave. He created an original blog, Being a Patient Isn’t Easy, and got a huge number of hits. He then went on social media and through a social media connection with a physician at Mt Sinai in New York, was referred back to a surgeon at Oxford. And so Michael became, as he loved to remind us, the eleventh colon transplantee in the UK, an innovator as a patient. With that story, Michael then went on to keynote at prestigious conferences. This was followed by his becoming an entrepreneur-in-residence at Stanford Medicine X  and creating an award-winning start-up, named 11 Health. His start-up was devoted to connected objects that would make life easier for patients and professionals, and getting his startup’s product reimbursed. I remember asking him how he had worked his way through the regulatory process for the products, and he replied, in typical Michael fashion. ” I googled to find out what we had to do, and then called the FDA and got answers to any questions we had. They were quite helpful.”
Michael identified the opportunities and went after them, as a fearless surfer would see the waves coming.
So what would Michael want us to do now? Isn’t the answer that patients continue to be the trailblazers, showing us the right way forward! Michael was not a micro-manager. I can hear him say “Just come up with some ideas and go ahead, with optimism. That’s all there is to it. And let me know how it goes.”
Denise Silber